A 62-year-old woman with a 30-pack-year smoking history is evaluated.

A 62-year-old woman with a 30-pack-year smoking history is evaluated with a history of chronic shortness of breath. She has mild left-sided chest discomfort. She denies fever, chills, and night sweats and has no localizing signs on physical exam. A CT-guided needle biopsy of the lesion seen in the CXR in Fig. below is performed and reveals malignant cells. 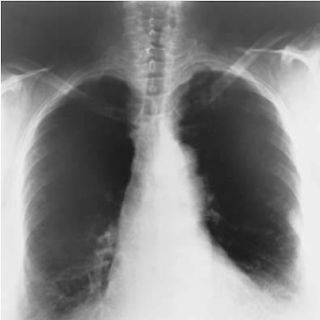 This malignancy is associated with
a. Positive sputum cytology
b. A good response to chemotherapy
c. Incidentally detected peripheral carcinomas on CXR
d. Cavitation in the majority of these carcinomas


The answers are 6-c, 7-c. An SPN in a 42-year-old smoker mandates a diagnostic workup. In this case, a CT-guided biopsy revealed malignant cells. Adenocarcinoma is commonly peripheral and represents about 30% of the total number of lung cancer cases. Its incidence is rising especially in females. Adenocarcinoma frequently presents as an incidental finding on x-ray. The other major histological types of lung cancer tend to have central localization and are as follows:
Posted by Pimeonline at 00:02 5 comments:

A 34-year-old woman, a recent immigrant from Eastern Europe, is seen with complaints of vague chest discomfort after an upper respiratory tract infection.

A 34-year-old woman, a recent immigrant from Eastern Europe, is seen with complaints of vague chest discomfort after an upper respiratory tract infection. She is not a smoker and gives a history of BCG vaccination when she was an infant. Physical examination is normal. PPD is 10-mm induration and induced sputum for acid-fast bacilli is negative. CXR is shown below: 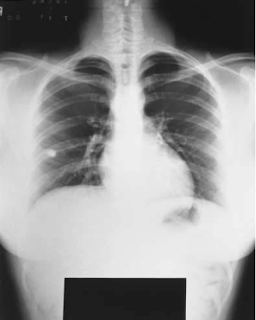 What is the most likely diagnosis?
a. Granuloma
b. Scar carcinoma
c. Coccidioidomycosis
d. Hamartoma

What is the next step in the management of this patient?
a. MRI of the chest
b. Fiberoptic bronchoscopy
c. Comparison of previous chest radiograph, if available, and repeat chest radiograph in 3 mo
d. Treatment with four-drug anti-TB chemotherapy

This chest x-ray shows a normal heart size. No pleural or mediastinal disease is noted. Cardiophrenic and costophrenic angles are clear. A dense, rounded solitary pulmonary nodule is noted in the right lung.

The answers are 2-a, 3-c. With a history of a positive PPD in a young immigrant and the presence of a calcified peripheral SPN, the likely diagnosis is tuberculous granuloma. Comparison with a previous x-ray to confirm stability of the lesion would prevent the need for further diagnostic tests. An MRI of the chest would not add definitive information, and bronchoscopy for a peripherally located calcified lesion would be of low yield. Since this lesion probably represents latent, old, healed granulomatous focus, treatment with four antituberculosis drugs is not warranted unless evidence of active disease is seen.
Posted by Pimeonline at 23:59 No comments:

A 40-year-old male smoker presents with a history of chronic cough.

A 40-year-old male smoker presents with a history of chronic cough. He has had symptoms of an upper respiratory illness for a few months since visiting family in Arizona. Physical exam is normal. CXR is shown below in Fig. below. The next step in management should be: 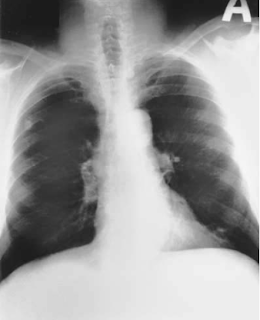 This chest x-ray shows a radiographically dense nodule in the left hilum. Cardiophrenic and costophrenic angles are clear. An 0.8 × 1-cm circular solitary pulmonary nodule with peripheral yet distinct calcification in the superior aspect is seen overlying the 5th posterior rib in the right upper lung zone.
The answer is c. Based on the age of the patient, risk factors, and persistent symptoms, further diagnostic tests are warranted. Observation for 11 months is inappropriate. Due to the peripheral nature of this lesion, a CT-guided needle biopsy would be the best diagnostic strategy and have a better yield than a bronchoscopy. Pulmonary function tests would be helpful if surgery is planned, but would not alter the diagnostic steps. In this case, the CT-guided biopsy revealed coccidioidomycosis. This is caused by a fungus (Coccidioides immitis) in the soil and is seen in desert semiarid climates with a short, intense rainy season. It is endemic in southwestern North America, Mexico, and Central and South America. Most patients are asymptomatic or recover fully after initial flulike illness. The radiographic findings of coccidioidomycosis are variable and depend upon the severity of the disease. Most granulomas are smaller than 2 cm, and almost all are less than 3 cm in size. Besides SPNs, in the early stages of coccidioidomycosis patchy infiltrates may be accompanied by hilar and mediastinal adenopathy and less frequently by pleural effusion. In cases of persistent disease, infiltrates may enlarge.
Posted by Pimeonline at 23:57 No comments:

The photomicrograph is of a urine specimen from a 15-year-old girl.

The photomicrograph is of a urine specimen from a 15-year-old girl. She has had intermittent fever, malaise, and weight loss over the previous several months. Recently she has developed swollen hands, wrists, and ankles, the pain of which seems out of proportion to the clinical findings. She also complains of cold extremities with some ulcerations of her distal digits. The laboratory test most likely to assist in the diagnosis of this condition is

The answer is a. The figure accompanying the question depicts a red blood cell cast characteristically found in the urine of patients with glomerular disease. The fever, malaise, and weight loss as well as the arthritis involving mainly small joints are common findings of systemic lupus erythematosus (SLE). Raynaud phenomenon resulting in digital ulceration and gangrene in a few patients may also be seen. Not described in this patient is the oft-seen malar rash in a butterfly distribution across the bridge of the nose and the cheeks. Simultaneous urine and serum electrolytes for bicarbonate determination hint at renal tubular acidosis that often presents with failure to thrive and unexplained acidosis, sometimes with repeated episodes of dehydration and anorexia. Poststreptococcal glomerulonephritis can present with red cell casts, but the symptoms usually develop 8 to 14 days after the acute throat infection. Urinary tract infections, especially of the upper system, can result in casts, but they would be expected to consist of white rather than red cells. Elevation of the erythrocyte sedimentation rate may be found in SLE, but this is a nonspecific finding noted in many other chronic and acute inflammatory conditions; its diagnostic usefulness in this situation is limited. 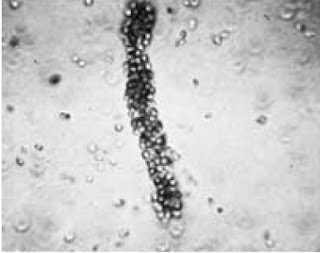 Posted by Pimeonline at 23:10 No comments:

A 7-year-old child is noted to have 2+ protein on urinalysis.

A 7-year-old child is noted to have 2+ protein on urinalysis. A 24-h collection of urine reveals a protein excretion of 2.5 g/24 h. A thorough history might reveal ingestion of which of the following medications?

The answer is c. The patient described appears to have nephrotic syndrome (protein excretion of greater than 2 g/24 h). Drug-related nephrotic syndrome has been described in connection with the use of trimethadione, penicillamine, captopril, probenicid, ethosuximide, methimazole, lithium, procainamide, chlorpropamide, phenytoin, paramethadione, tolbutamide, some of the nonsteroidal anti-inflammatory drugs (NSAIDs), and certain heavy metals (e.g., gold, mercury-containing medications). 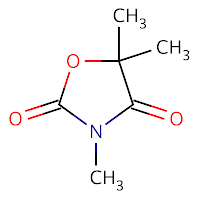 Posted by Pimeonline at 23:09 No comments:

A 3-year-old girl is admitted with the x-ray pictured. The child lives with her parents and a 6-week-old brother.

A 3-year-old girl is admitted with the x-ray pictured. The child lives with her parents and a 6-week-old brother. Her grandfather stayed with the family for 2 months before his return to the West Indies 1 month ago. The grandfather had a 3-month history of weight loss, fever, and hemoptysis. Appropriate management of this problem includes

The answer is d. The key to controlling tuberculosis in children and eradicating the disease is early detection and appropriate treatment of adult cases; the child, once infected, is at lifelong risk for the development of the disease and for infecting others unless given isoniazid prophylaxis. The usual source of the disease is an infected adult. Household contacts of a person with newly diagnosed active disease have a considerable risk of developing active tuberculosis, and the risk is greatest for infants and children. Therefore, when tuberculosis is diagnosed in a child, the immediate family and close contacts should be tested with tuberculin skin tests and chest radiographs and treated appropriately when indicated. Bronchoscopy would be indicated only in unusual circumstances. Three to eight weeks is required after exposure before hypersensitivity to tuberculin develops. This means that the tuberculin test must be repeated in exposed persons if there is a negative reaction at the time that contact with the source of infection is broken. TB skin tests are usually negative in infants of this age, even when active disease is ongoing. A logical preventive measure is the administration of isoniazid to the baby for 3 months when a Mantoux (purified protein derivative, PPD) can then be placed. Transmission of tuberculosis occurs when bacilli-laden, small-sized droplets are dispersed into the air by the cough or sneeze of an infected adult. Small children with primary pulmonary tuberculosis are not considered infectious to others, and they are not capable of coughing up and producing sputum. Sputum, when produced, is promptly swallowed, and for this reason specimens for microbial confirmation can be obtained by means of gastric lavage from smaller children. 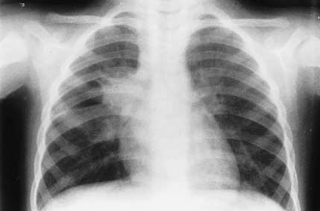 Posted by Pimeonline at 23:07 No comments:

A 13-year-old girl with a history of 2 days of cough and fever has the chest x-ray shown here. The most appropriate treatment is

The answer is b. The x-ray reveals a lung abscess involving the right upper lobe characterized by the round density, the air-fluid vel, and the opaque rim. Lung abscesses are usually caused by anaerobic bacteria such as bacteroides, fusobacteria, and anaerobic streptococci, and on occasion by Staphylococcus aureus and Klebsiella. The organisms were previously sensitive to penicillin, but some anaerobic organisms (especially bacteroides) are now resistant due to ß-lactam production. Lung abscesses frequently respond surprisingly well to treatment with antibiotics alone. 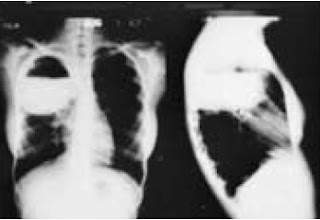 Posted by Pimeonline at 23:06 No comments: